SEOUL, May 16 (Yonhap) -- Some four decades ago, artist Lee Kun-yong drew a circle on the ground. Pointing at the center of the circle, he yelled, "There." He stepped inside and shouted again, "Here."

In another performance, he stood in front of a canvas made of wood veneer, with his back to it. Unable to see what he was creating, he drew on the canvas as much as his limited body movements allowed him to.

For a young Lee, overcoming the limitations of a flat, two-dimensional canvas was one of the most pressing issues as an artist. Equally important was to raise awareness of the importance of an artist's body as an artistic medium.

In 2014, the National Museum of Modern and Contemporary Art (MMCA) of Korea held a retrospective of the country's first-generation performance and conceptual artist. At the exhibition showing his oeuvres that span 40 years, the artist re-enacted "In Snail's Gallop," his work first performed during the Sao Paulo Biennale in 1979.

Squatting at the corner of the exhibition hall, he drew line after line and, at the same time, erased parts of the just-drawn lines by his feet as he moved forward. 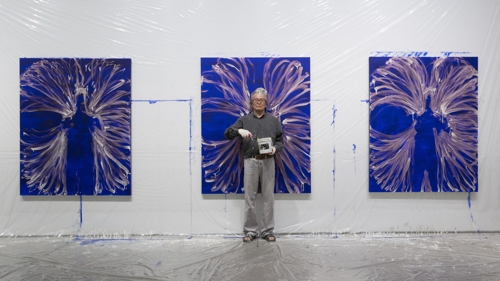 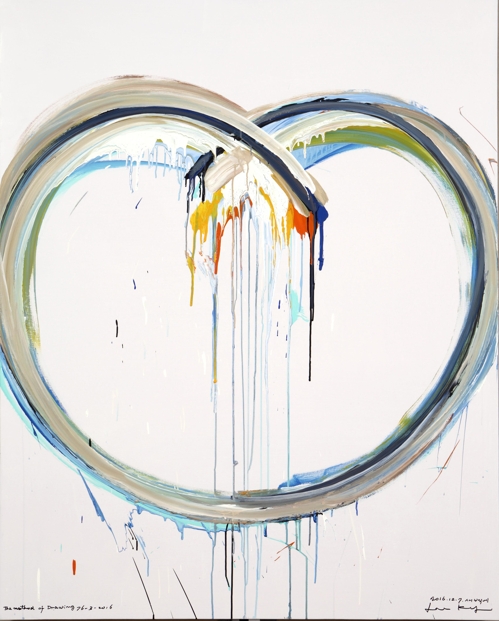 The image provided by Leeahn Gallery in Seoul shows Lee Kun-yong's "The Method of Drawing 76-3-2016." (Yonhap)

One of the country's pioneers of the avant-garde art movements back in the 1970s, the 75-year-old artist is still actively practicing his lifelong philosophy that art is defined by an artist's physical movements and that it is the embodiment and reflection of a social, political atmosphere.

Living through the dark patches of the Korean modern history meant that freedom of expression was fully guaranteed only when it was helpful in justifying the unjustifiable by the authoritarian government.

"In 1975, I was taken to the National Intelligence Service. One of the officers (intentionally) stepped on my thighs while investigating me. I suffered from the injuries for years to come," the artist said during an interview with Yonhap News Agency at Seoul's Leeahn Gallery on Monday.

"He was trying to destroy my thoughts by harming my body. Since then, I've became more self-assured about physically expressing my thoughts, even if it involves the simplest act like drawing a line." 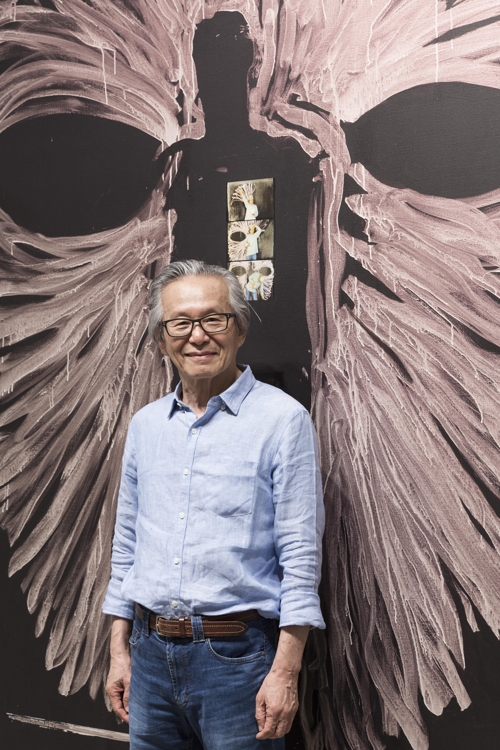 The artist is scheduled to open a solo exhibition at the gallery on Thursday, which will run until July 29, with some 21 artwork, including paintings and a video of his performance. On display include some paintings that he created at the gallery earlier this month.

According to the gallery, the exhibition is designed to throw new light on his painting series, such as "Body Scape" and "The Method of Drawing," which have been seen more as a by-product or a record of his performance than as an individual art piece.

His paintings are not a painting in the traditional sense of the word.

He paints behind a canvas, arms stretched over the front of it. When he does stand in front, he doesn't look at what he is working on. Only his physical movements, like swinging his arms or dragging his feet, are there to leave a trace of the artistic activities.

In every aspect of social life, direct interaction with others is the most democratic way of doing things, he said, adding that the same goes with the way of doing art.

"The primal purpose of art is to communicate with contemporaries. When art stops reflecting the era, it is destined to disappear," he said. 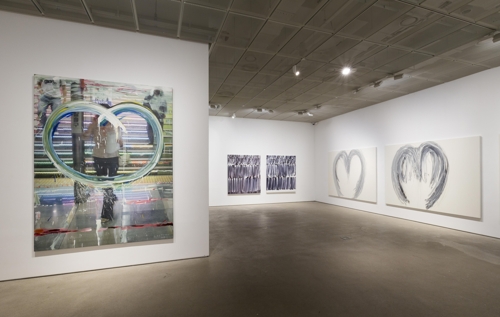 The undated photo provided by Leeahn Gallery in Seoul shows the exhibition hall of the gallery where artist Lee Kun-yong's solo exhibition opens on May 18, 2017. (Yonhap) (Yonhap)