In conversation with curator Yilmaz Dziewior, the Korean artist reflected on absent communities and multi-sensorial action. 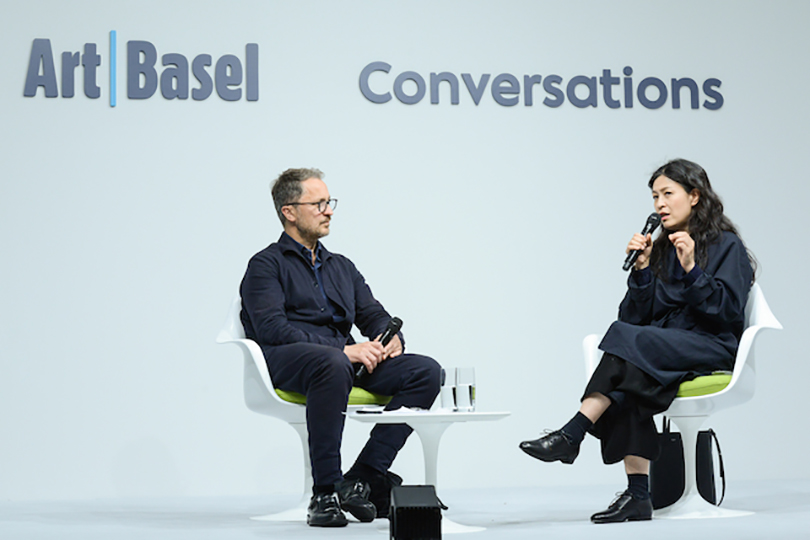 Opening with a clip from her film 〈Dress Vehicle〉, audiences were introduced to Korean artist Haegue Yang’s primordial way of communication. The video exhibits a machinic structure, with a precarious pile of cubes, being driven around the gallery by a mysterious internal conductor. As the mass whirls around the space, a ‘narrator’ emits whispers, wails and melodies, as if translating the object’s movement into sound. For Haegue Yang, the most recent recipient of the ‘Wolfgang Hahn Prize,’ objects, textures, sounds and scents make for multi-sensorial environments, reflecting her yen for site-specific research and context-oriented practice.

As part of its Conversations segment, the 《Art Basel》 2018 fair in Basel gave the stage to Haegue Yang and curator Yilmaz Dziewior to discuss the artist’s prolific career and ongoing survey exhibition, 《ETA 1994-2018》, now on view at Cologne’s Museum Ludwig. In introducing the artist’s first-ever retrospective, the casual conversation addressed Yang’s experimental career and eagerness to rearrange and re-contextualise her work in search of new sensorial understandings. 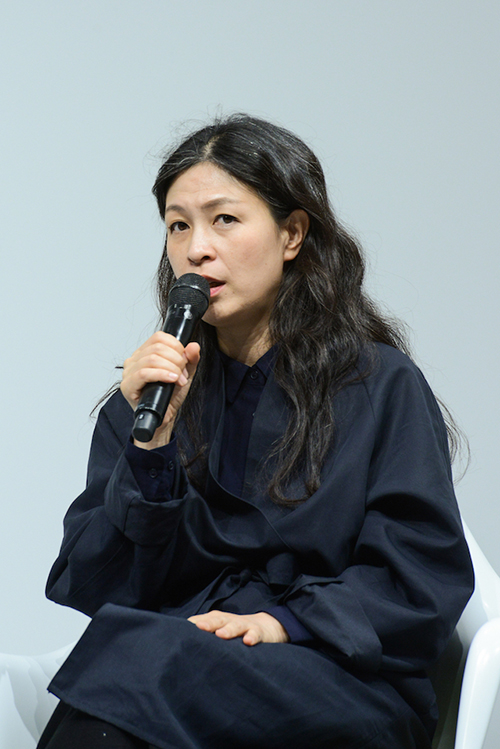 Combining industrial production and folk craftsmanship, Yang explores the affective power of materials in destabilising the distinction between the modern and pre-modern, the generic and the fragmented. Her unique visual language is popularly comprised of Venetian blinds, clothing racks, synthetic straw, bells and marbles – lacquered, woven, lit and hung, all in an exploration of material, time, place and shifting context. While much of her work is created on-site, providing her with the space and resources to conduct specified research, Yang’s multimedia work is accompanied by philosophical, political and emotionally charged readings of historical events and figures.

As her brief introduction in the video states, Yang’s ongoing research is empowered by underlying references to art history, literature and political history, through which she re-interprets some of her recurrent themes: migration, postcolonial diasporas, enforced exile and social mobility. As a result, 《ETA 1994-2017》 looks at her career through various geopolitical milieus in an attempt to understand and comment on the here and now. This translation – from the political and historical into the formal and abstract – demonstrates an unshakable trust that historical narratives can be made comprehensible without being linguistically explanatory in an objective or didactic way. 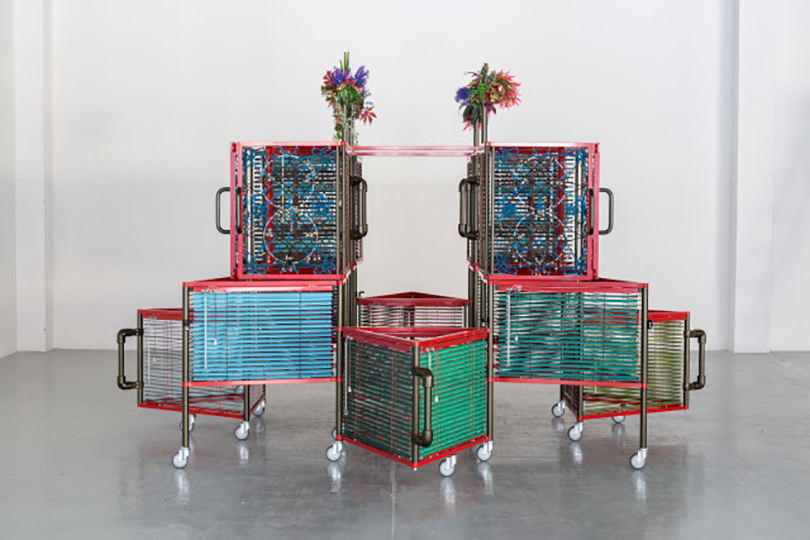 The title of Yang’s Museum Ludwig show, the anagram for ‘estimated time of arrival’, has a double meaning: viewers certainly think of time and punctuality, but also the idea of place. One’s time of arrival determines the when, but not the where, yet it is a phrase that is used to navigate the juncture between point A and point B. As Yang spends much of her time on the road, the title lends itself from periods of travel, which in turn, lends itself from culture, translation, history and identity politics. The retrospective exhibition is a moment of pause in the artist’s fast-paced, wandering practice, resting before its next voyage between points A and B.

In discussing her work’s site-specificity, Yang notes that it is important to go to the place she will exhibit, to conduct research, and create objects, sounds or effects that feed off of their temporal location. For the 《Sharjah Biennial》, for example, Yang collaborated with local craftsmen, creating what she calls an “open, context-oriented practice.” She states:

“In terms of the different modes of production, my attitude has been one of ‘indetermination’. I don’t want to determine myself as someone who has this or that method of research and production. I wanted to have a multiple way of work – sometimes it is on site, sometimes it is based on the research of a very particular place. From this, I form different genres and media. I have to make an effort to be flexible, to be free.” 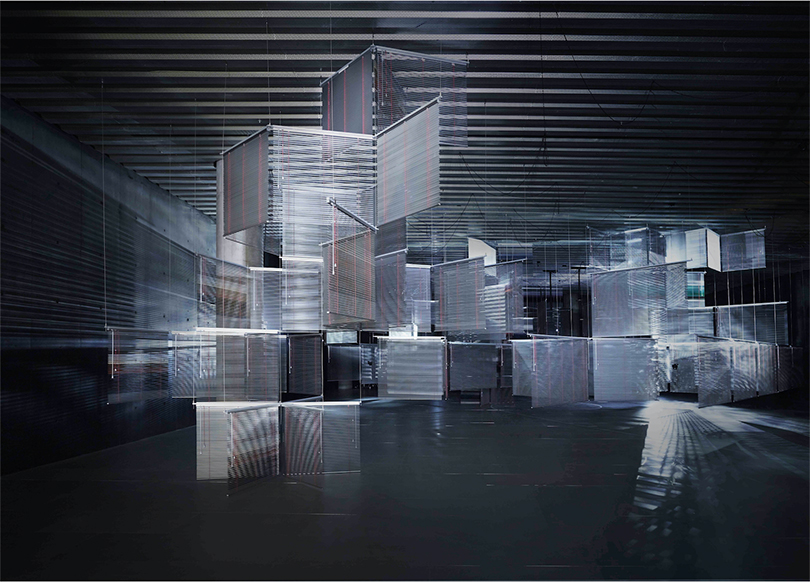 Fragmented fields and the five senses

Yang’s installations are to be received with all senses: viewers feel the warmth of her hanging lights, smell the setting, feel the objects’ textures and hear them playing off of one another. The artist’s job is to create the spaces where this kind of tactile exploration can occur; she calls them “multi-sensorial arenas of excitement.”

It was important for Dziewior to offer the museum as an empty shell, but not a typical white cube void of personality or connection to its surroundings. In each of their renderings, Yang’s pieces take on new chameleonic meanings and identities. As such, 《ETA》 begins with an open window, letting the scent of the city and nearby train station play an equal role. 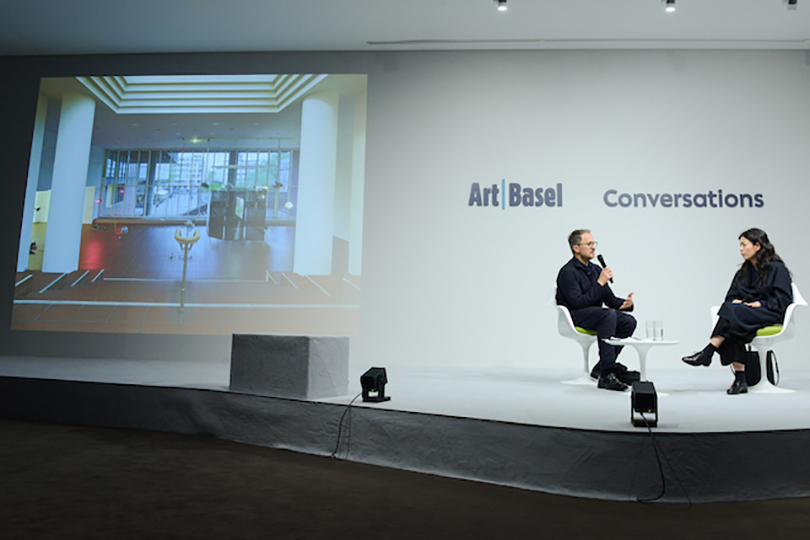 The artist also introduces 〈Storage Piece〉(2003), which was realised during an artist residency at Delfina Studio in London. Yang explains that as a young artist:

“You reach your limit very easily. I had doubt about the breadth of the piece and the environment of the ‘arts enterprise.’ You make a work in one time and place, but then its packed away and shipped to other institutions. And for young artists, it’s nothing but a burden. I reached my limit of logical ability… and when all of the opportunity came, I had to be innovative so as not to limit myself or overreach my ability to produce.”

〈Storage Piece〉 was born out of this less glamorous aspect of exhibition. Yang took all of her currently stored work and arranged it on Euro Pallets in the most economical fashion. In their plastic wrap and shipping frames, the works are left in limbo. The audience does not get to see them, overlapping an artwork’s life of exuberant display and hidden transport. 〈Storage Piece〉 was first exhibited in a non-commercial space, but then travelled to an art market in Berlin and was purchased by a collector. Unaware of exactly what he was buying, questions of fragmentation and intention arise: should the works be unpacked? Do you fulfill a travelling artwork’s prophecy or leave it in the state in which the artist/curator/handler left it? 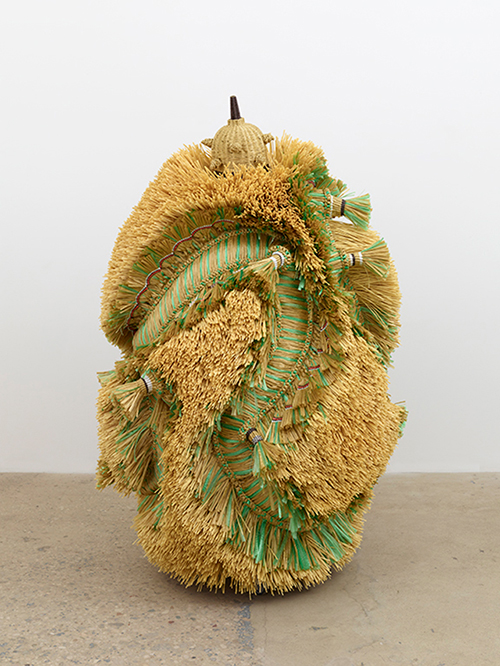 In many of Yang’s videos, humans are eerily absent, yet they act as the artist’s daily diaries. She collects footage from a variety of places and occasions, but what was important to her, in gluing all of the footage together, was a kind of “genericness” – a visual standard or seamlessness where “you cannot differentiate between a puddle in Korea and a sunset in Brazil.” The artist explains that there is a kind of melancholy in urban landscapes where, even though they are so far apart and exotic to one another, they are connected. In each video, in each location, it is only a fleeting voice that provides a dialogue that is so internalised and contemplative so as to express the similarity between spaces and places.

This alludes to Yang’s coined “passive aggressive commonness,” namely, the moments people feel they have nothing in common, but are inextricably linked in an invisible commonality. She explains:

“We are duress, we are the negative space, what is left over. All of the leftovers are fundamentally connected with one another; we build new communities based on this fragmented commonness.”

The final portion of the 《Art Basel》 conversation probes into Yang’s self-exoticisation and cultural appropriation. In many sculptural works, references to African and Asian crafts, pagan culture, shamanic rituals – what she calls “anti-modern elements” – are present. But as the curator points out, “she sometimes overdoes it to the extent where it becomes humorous.” For Yang, the experimentation comes from a travelling curiosity and a keenness to understand different material interactions. Their “physicality dictates her.” It is as if each of Yang’s objects, whether they be kinetic sound machines, drooping heat lamps, imported clocks or ‘organic’ textile sculptures, are fragile relics of fleeting moments. Through them she asks: is the object separate from the work? Can the two be united? Yang’s influences are dually defiant: nearly restrained from comprehension, her figures resurface still, like ghosts haunting stories untold. She concludes:

“As long as I could be real to my time and place, I think all these phenomena are meaningful to contemplate.”

※ This article was originally published in Art Radar(http://artradarjournal.com) on 25 JULY 2018 and reposted under authority of a partnership between KAMS and Art Radar.