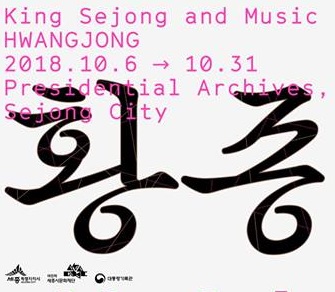 This year marks the 600th anniversary of the reign of King Sejong, who is regarded as the greatest sage king in the history of Korea. In this meaningful year the Sejong Special Self-Governing City, which inherited the name and spirit of King Sejong, is scheduled to hold an exhibition on King Sejong and Music, Hwangjong.

Amongst King Sejong’s many achievements, there isn’t a single thing that we should forget, but it is worthwhile to reencounter his achievements on Eum and Aak. King Sejong respected Ah Aak(court music) and contributed to the development of Hyang Aak(Traditional Korean Music). His efforts improved musical instruments; created music scores called Jeongganbo and composed music. The fact that one country’s king produced music used in ancestral rites meant that he supported the country’s political position. King Sejong’s music contains the hope of maintaining the kingdom's independence.

"Hwangjong" is symbolic of King Sejong’s musical achievements. King Sejong enacted "Hwangjongeum," the most standard music note (Eum) of the 12 rhythms (Yul), by making a musical instrument called Pyeongyeong which was made with stones found in this land. Furthermore, he used crops that have been produced in our soil to measure the length of a music note (Eum). He enacted our own music note, which fits our own standards and that which is differentiated from the Chinese. The king also produced Hwangjongchuk, a measuring tool that measures the length of our music notes. Therefore, Hwangjong carries the several meanings; musical instrument, the name of music note and Doryanghyung. Doranghyung becomes the standard measurement of those times, so when "Hwangjong" acts as the standard, it also carries the meaning of the self-consciousness on what we set as a standard and what we believe is right. King Sejong’s ideology of governing the kingdom placed importance on an unbiased, balanced perspective which is also embedded in Hwangjong.

The ten artist teams that participated in this exhibition focuses on analyzing Jeongganbo, visualization Hwangjong and 12 Yul, balance and symmetry, self-examination on standards, and placing importance on the thought that King Sejong’s policies on music were also political actions aimed at a life of peace and happiness. Nowadays our communities need vivid on-site experiences and the reaffirmation on the perspective of King Sejong, a sage king, who dreamt of a reign of peace. A reign of peace means a condition when one entity is formed through harmonization between an individual and society. What is proposed is the enlightenment of "Hwangjong" in our daily lives that carry harmony, balance, ideology, dream and self-consciousness.