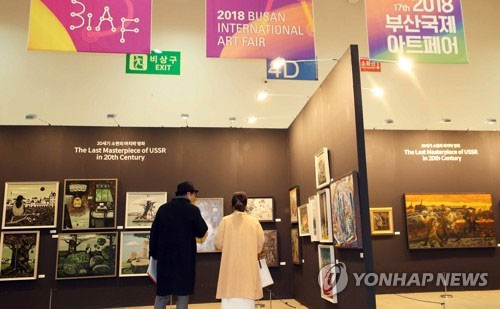 Visitors look at an artwork by Korean artist Choi Sung-won during the annual Busan International Art Fair in the southeastern port city of Busan on Dec. 6, 2018. (Yonhap)

The K-Art International Exchange Association (K-Art), one of the largest exhibitors of contemporary and traditional art, has held an art market in the southeastern port city of Busan as part of efforts to encourage direct transactions between artists and their consumers.

Launched in 2007, the BIAF is a market where artists and collectors can make direct deals on the spot.

During the five-day run, the fair also featured 56 artworks by artists who worked in the days of the Soviet Union, under the title of "The Last Masterpieces of USSR in 20th Century.“ 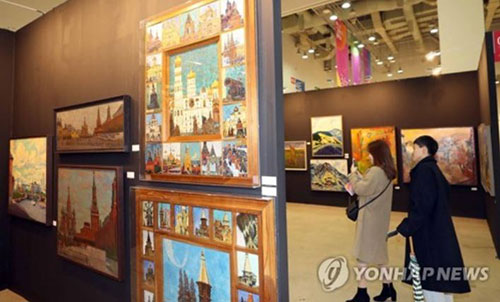 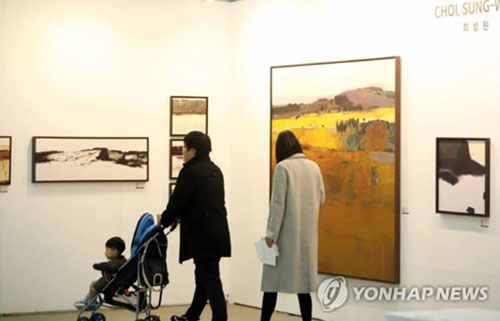 Visitors look at an artwork by Korean artist Choi Sung-won during the annual Busan International Art Fair in the southeastern port city of Busan on Dec. 6, 2018. (Yonhap)

The special exhibition on the Soviet Union artists gave a rare glimpse into a slew of genres in Russian art, including Russian impressionism and contemporary art in the 1990s.

Renowned artists from the Sir JJ School of Art in the western Indian city of Mumbai and young artists from Tokyo's Ginza displayed their works in the market.

Also in the market were works by such towering Indian painters as Alphonso Arul Doss, a former principal of the Government College of Arts and Crafts in Chennai, and Rm. Palaniappan, an exhibitor at Sotheby's auctions.

The BIAF, which provides artists and viewers with opportunities to make direct transactions, has been hailed for contributing to pricing artworks in rational ways and thus enhancing the transparency of the art market.

Kim In-joon, an official at the association, said the art fair has blazed a trail for a method in which art consumers can make direct contact with artists for deals, a measure to maximize artists' interests.

Visitors look at artworks by artists who worked in the days of the Soviet Union during the annual Busan International Art Fair in the southeastern port city of Busan on Dec. 6, 2018. (Yonhap)

"We are drawing up plans for international exhibitions, including the Mumbai Biennale and the 4th Chennai Chamber Biennale, in order to give a boost to Korean artists' forays into overseas markets," Kim also said.

According to K-Art chief and curator Heo Sook, the association has provided 29 new artists of South Korea with booths for free this year as it makes efforts to nurture those who will take the lead in developing South Korean art.

"We will plan to give a select 40 new artists the same treatment next year," Heo said.

The association held the inaugural Mumbai Biennale, titled "Beyond the Frames," in Mumbai in October for a six-day run, bringing together 120 South Korean and 80 local artists in the first major joint art exhibition by the two countries.